As a scientist from the field of solid state research, I experience the spread of the coronavirus Covid-19 as a tragedy. Instead of just stunned how the decision-makers wait without action until the problem becomes difficult to control, I prefer to take the initiative: I will show with simple means why we often misjudge natural growth problems and what we can do. After all, I have been concerned with the problem of contamination since I started researching open radioactivity. The parallels are surprisingly similar, only there we have the opportunity to measure our errors directly.

The spread of Covid-19, which leads to severe diarrheal diseases, has now arrived in Germany for the second time. After the epidemic in Italy has just risen to over 889 people, new cases have now been reported in Germany. Due to the carnival, it will be difficult to find all contacts. Most people will surely not be as surprised as I am: If we do not immediately introduce travel restrictions until the situation is clarified for a region that has lost control of the corona virus, travelers will simply bring the virus to Germany bring in and face the same problems as in Italy.

But why is it spreading so quickly? This became clear to me in the first few days when the new epidemic was reported in China by looking at the numbers: the doubling time was only two days. What does that mean? The cumulative number of all infected doubles after two days. After another two days, this number doubles again, i.e. 2, 4, 8, 16, 32, 64, 128, … (2 n). It is the famous story with the grain of rice on the chess board, where the number of rice grains of the previous one has to be doubled on each new field. The 64 field then has around 400 times the amount of world rice production.

As human beings, we can usually only think linearly (distance thinking) and find the true extent difficult to introduce. It is similar with us scientists. We only learned to put the data into a program and that helps immensely. After the first five days, the explosiveness of Covid-19 was clear from the case numbers, including a roughly determined death rate. The math for an estimate is amazingly simple - you should just use it.

When is the right time to act?

What number of cases would you raise the alarm in your country? With 30, 100, 500, 1000 infected? When does it become critical and how much time is left to act? A calculation example: If we assume 500 infected people and divide repeatedly by the number two, the following series of numbers results: 500, 250, 125, 62, 31 (simply rounded). That is four doubling times, eight days.

When should we start trading? At number 125? The answer can only be: The first day! If we act only on the eighth day and need our measures for another eight days to implement, then we are already at a case number of 8,000. So from 31 to around 8,000 within 16 days. We juggle with exponential growth small numbers represent an apparent certainty. Ignorance almost always leads to a misjudgment. Short doubling times are particularly critical. After the rapid initial phase of Covid-19 with its doubling time of two days, this is later still at five to six days. For comparison with the Ebola epidemic in 2014⁄2015, it was about 20 days in the first phase and 40 days in the second. This is much longer than with the corona virus.

But what about the controllability of individual infected people? Based on an incubation period of a maximum of 14 days, all contacts of the infected person must be found for this backward period. Let us assume that the person has five contacts with other people per day (at the bakery, shopping, tram, at work, …) so that is 5x14 = 70 people to be found and who should be tested. These 70 people also had contacts and so on. If we only calculate the second stage (14x5n, n = 2), we have to find around 350 people from the incubation period for each infected person. With 500 people infected, that would be 175,000 potentially infected. At 100, there are still 35,000 contact persons - the total population of a small town. As soon as we have over 500 non-isolated people infected, the situation becomes very difficult to control. We will be able to see this further in the coming days using the example of Italy.

China reacted too late at the start of the epidemic. The misjudgment of the danger of this infection is understandable from a human point of view and is not an isolated case. This phenomenon can also be observed in democracies. Then there is the fear of a wrong decision. Who likes to cause panic? If the expected does not occur afterwards, your own post is at stake. In the initial phase, it is hoped that individual cases can still be fished out. Therefore, you wait and misjudge the critical number, from which you should act differently. Both factors, fear of decision and waiting, are mutually beneficial. Valuable time is lost.

In individual cases up to 15-30 infected people, the chances are still good to find all contact persons (how long does it take?). This is especially true when we are dealing with just arrived. However, if the infections occur within the population, then the first cases are just the tip of the iceberg. Further waiting will favor the subliminal spread. Immediately imposing a regional travel ban here for a few days or a week would force the other infected to rest and slow the spread. In this way, valuable time can be saved before the disease breaks out in the other infected persons - the average incubation period of the coronavirus is about five to six days - and the extent of the subliminal spread becomes apparent. Only then can the The spread of the infection can be realistically assessed and targeted action taken.

With exponential growth, every day counts, especially in the early stages. The economy should also recognize that a short-term ban is much cheaper than if the economy suffers in a widespread epidemic or if two percent of the consumers die. The economy cannot recover directly from this.

In severe weather, we accept restrictions - why not in the event of a critical epidemic? By the way, I deliberately do not write the word pandemic because the WHO decided to abolish this category.

In this way, the unpleasant word from language usage is abolished with simple measures in an actual crisis. An ingenious idea that you have to come up with first.

The West sticks its head in the sand and thinks the epidemic cannot be controlled anyway. So we let them go. China has recognized its mistake and declared war on the virus. One can argue about the hard methods. That would be an issue in itself. However, the data currently speak for China, provided that they are correct. In the end, China will probably have to protect itself from the rest of the world.

I hope that our politicians will also wake up in time. Ultimately, people in a region would only need to stay calm at home for three weeks in a Covid 19 epidemic. Vacation at home, alternatively home work. Would that be so bad? Is that such an absurd measure? During this three-week “break”, the virus is done, even on surfaces. If we take other measures, we can expect a creeping epidemic over many months.

Travel to an area where an outbreak is no longer under control should either be discontinued or sufficient quarantine provided after entering Germany. Those who do not do so will help spread the virus and endanger their own population. 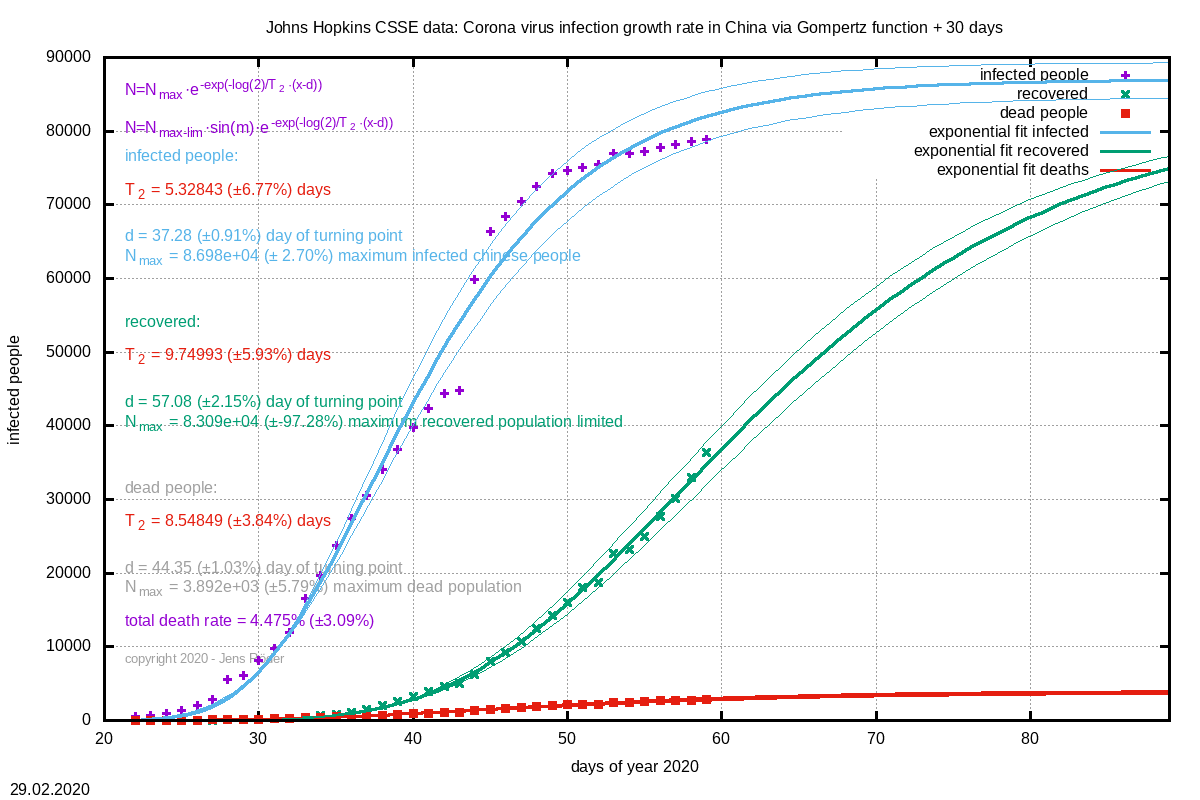 Figure 1: The figures from China of infected people (blue), deceased people (red) and healthy people (green) adjusted with the simple Gompertz function are shown. Nmax specifies the maximum calculated number of the respective group, d the turning point of the function and T2 roughly the half-life at the turning point. The delays of the various curves can be determined via the times of the turning points: average recovery time after infection and average time to death for the proportion of those who died.

How dangerous is the virus?

I am not a virologist. I just look at the data: The death rate is around 2.5 percent if we take the average numbers on the respective key date. However, this method is incorrect and leads to incorrect results. However, there are several days between diagnosis and death, during which the number of cases has increased exponentially. We must therefore count the deceased on the day of his diagnosis, otherwise the death rate will be reduced.

For example, suppose the average time between diagnosis and death is one week. If we calculate back the WHO data, the death rate is around 4.5 percent. The course of the infection in China has now arrived significantly above the turning point of the curve, so that the calculations are now more accurate. We can also see the delayed curve of the deceased and actually see an eight-day delay.

A case fatality rate of around 4.5 percent can also be obtained from a calculated maximum number of infected and deceased people. About 16 percent of those infected take a severe course. Over 80 percent survive the infection like normal flu. An average recovery time of approximately 20 days can be read from the data.

The above data are still to be regarded as a preliminary assessment. Since this is based on the official figures from China, significant deviations may be possible. But that’s still no reason to panic. The probability of getting the virus up to date is very low. However, the numbers of the coronavirus make it clear that we have a serious problem with the death rate and the number of severe courses. We should therefore act early so that we do not reach our logistical limits. Politicians should therefore take appropriate measures quickly.

The global data, without the data from China, currently shows purely exponential growth. It is not a good sign. It is clear from this that the control of the epidemic outside of China is not yet under control. 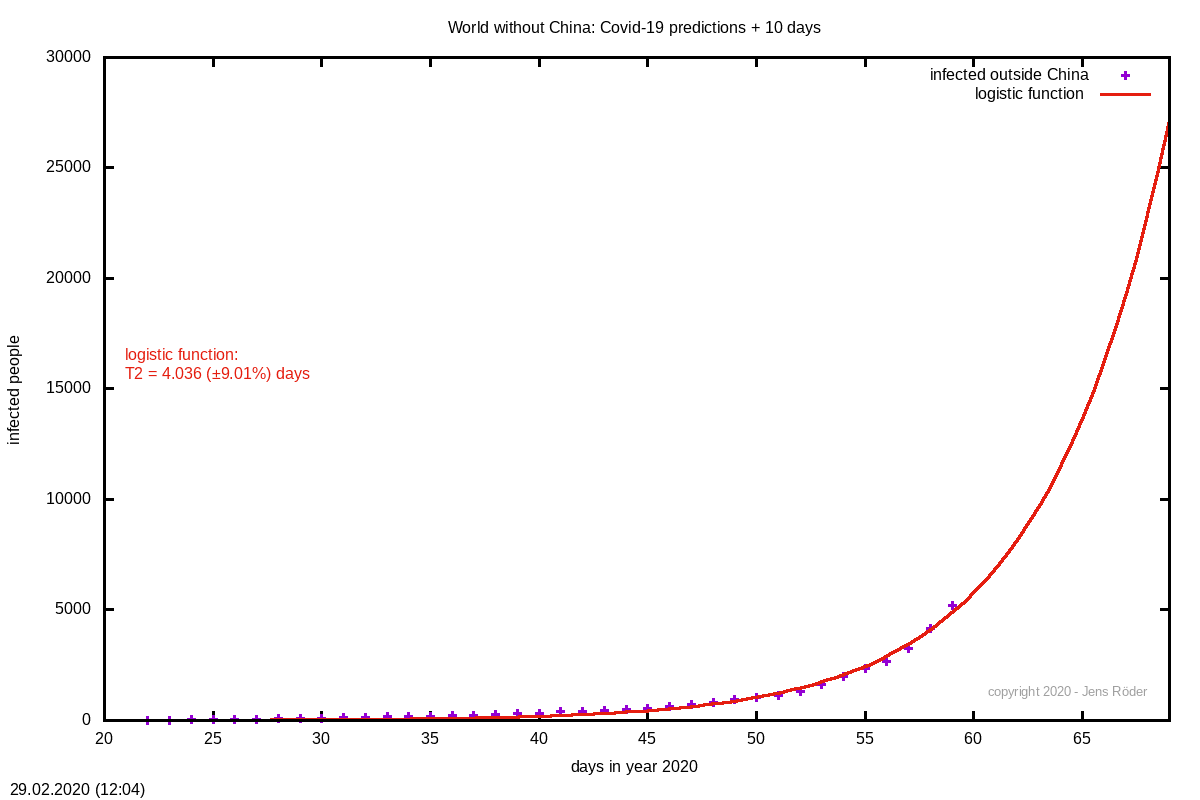 Figure 2: The worldwide course of those infected with the coronavirus, without the data from China. The doubling time is currently 4 days!

Many people find it difficult to correctly estimate exponential growth. If you want to work something in-depth, is is recommended to listen to the lecture by Prof. Al Bartlett. This lecture would also contain surprises for advanced learners. The main message in the video: The biggest challenge is the inability of humans to understand the exponential function. 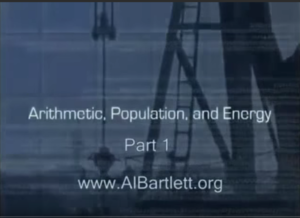